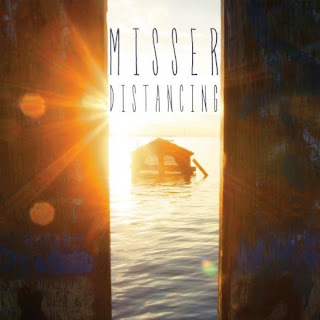 Sometimes side-projects can outshine the very bands that spawned them. While it doesn’t happen very often, it happens nevertheless, and Misser, an offshoot featuring members of This Time Next Year and Transit, is one such instance. Not only is Distancing a collection of some of the most exciting songs either Tim Landers or Brad Wiseman have penned together, this handful of songs may very well be the best music either man has put to wax, ever, regardless of what band they were writing the songs in.

While the pop-punk tag has been bandied about when Misser’s name enters the conversation, Distancing is much more than any simple sonic classification. This EP shows influences from all over the map, from indie to hardcore, starting with “Goddamn, Salad Days,” a shredding opening salvo that represents the harshest output Misser have ever produced as Landers’ vocals gets all sorts of unapologetically gruff here. The flawlessly immaculate “Burn Out” is sure to turn heads, a Brand New-esque opus that is the utter definition of the phrase ‘highlight track.’ The vocal interplay between Landers and Wiseman is seamless throughout Distancing, most notably when the band quickens the pace on “Infrared.” The way the two vocally switch on and off, even in the middle of a line, is picture perfect, making for one of the better vocal dynamics you’ll hear today.

This is an EP that shows Misser have a very bright future ahead of them, so let’s just hope they don’t have any plans to go anywhere soon – because if Misser is this good now, there’s no telling how quickly this duo will ascend to the pop-punk throne. Distancing is an EP that deserves to be heard, and even though 2013 has been a standout year for quality pop-punk releases, it would be criminal if this release were to go overlooked. Don’t let that happen.