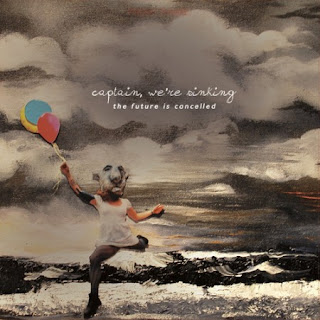 To say the very least, Captain, We’re Sinking’s The Future Is Cancelled is captivating. That’s really about the slow and skinny of it. It’s just that good. This album is honest, the bleeding heart-on-sleeve type, and though there are some melancholic underpinnings to this tremendous group of songs, there’s no noticeable sacrifice of anything in terms of melody.

Those afore mentioned melancholic underpinnings see the light of day almost instantly on the moody harbinger “Adultery,” a track that will leave you wondering if The Future Is Cancelled can get any better. And the simple answer is yes. “Brother” and “Montreal” lead the album out of the murky waters it had been treading, though bleak outings such as “”Annina, We Will Miss You” and the downright depressing “More Tequila, Less Joe” linger in the ethers in almost undeniable fashion. The hazy “A Bitter Divorce” features frontman Bob Barnett waxing all sorts of acidic heartbreak, including shattering lines that cut through the thick malaise such as “I made a list of everything that I despise, and I wrote your name down several times.” It’s clear that Captain, We’re Sinking are a band that prides themselves on the minutia of the elements of their liner notes, and there is no shortage of notable lyrics across the board on The Future Is Cancelled, but you’re best left to your own devices to find those memorable lyrics – just another selling point of this album.

If you’re in a punk band, then Captain, We’re Sinking is the band you want to emulate, and The Future Is Cancelled is an album you want to strive to release. And if that’s your goal, then the best of luck to you because you’ve got your work cut out for you.