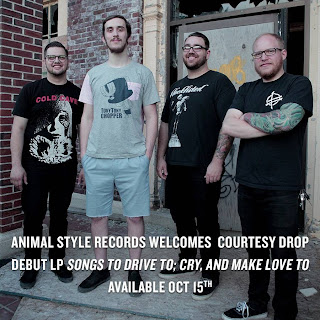 Nashville, TN post hardcore band Courtesy Drop have signed with Los Angeles based indie Animal Style Records. The band’s LP, Songs To Drive To; Cry, And Make Love To, will be released on vinyl and digitally on October 15.


Courtesy Drop is gearing up for the release of Songs to Drive To; Cry and Make Love To on Animal Style Records on October 15, 2013. The record will see a vinyl and digital release, with pressing details to be announced. The band previously released What Makes This Place Worth Calling Our Home in 2011.