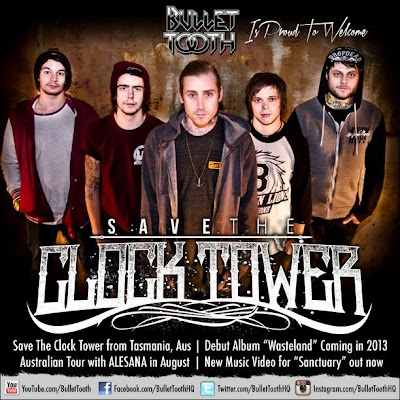 Bullet Tooth is excited to announce the worldwide signing of Save The Clock Tower from Tasmania, Aus! The band will release their Bullet Tooth debut album Wasteland later this year.

Save The Clock Tower are a 5 piece post-hardcore band from Launceston, Tasmania, Australia. The band officially began playing together in 2010 and took the small island by storm in a very short amount of time and are now heralded as one Tasmania’s leading heavy rock acts.

The band commented on their new signing and label home, "We are stoked to be a part of a great label like Bullet Tooth. Thanks to Josh Grabelle for seeing that hard work is paying off and every step we take is another step towards realising our dreams. Knowing that Josh has developed great bands such as Memphis May Fire, Bullet For My Valentine, First Blood, and Affiance gives us the best chance possible to move forward as a band and as individuals. Bullet Tooth has created a close family of bands and we cannot wait to meet and play with everyone!"

Save The Clock Tower have released two EPs; Letters in 2011 and The Human Condition in 2012, boosting their reputation and solidifying their fanbase across the country. They will be releasing their debut full length album Wasteland worldwide on Bullet Tooth later this year.