A Breach of Silence Signs to Eclipse Records 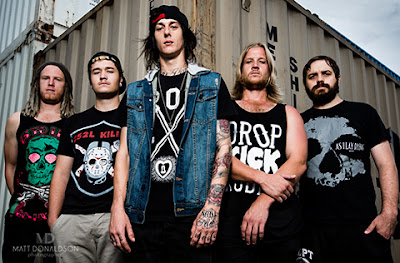 Eclipse Records is extremely excited to announce the signing of Brisbane, Australia’s infamous powercore band, A Breach of Silence to an exclusive, multi-album deal. The band just wrapped up production of their brand new full length album entitled Dead or Alive, which will be released October 1, 2013 by Eclipse Records (Mushroomhead, Bobaflex, Blowsight). The album was produced by Fredrik Nordstrom and Henrik Udd (Bring Me The Horizon, Opeth, In Flames, Arch Enemy) and recorded at HK Studios in Brisbane, Australia.

"Dead Or Alive combines the best of old school power metal and metalcore giving this album something of a creative edge, like a breath of fresh air” states guitarist Mat Cosgrove. “Every time you listen to the album you pick up something new, which lends it to never getting old. I have no doubt that it will pleasantly surprise people.”

Dead or Alive features 11 cutting-edge tracks of blisteringly-brutal metalcore. The track listing and cover art will be unveiled soon, however the band has leaked the song “Circles” in its entirety on SoundCloud at: http://snd.sc/19z7oWU.