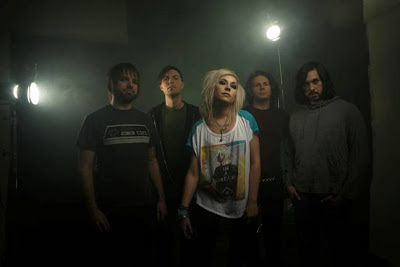 Tampa, FL rockers The Nearly Deads have signed with Standby Records and will release their new Zombie Survival Guide EP on August 20th.

Fresh off a Converse Battle of the Bands win at the Journey’s Backyard BBQ in Nashville, TN, and a #14 spot on the Billboard Next Big Sound Chart, The Nearly Deads are primed and ready to explode. The Nashville-based DIY band has created a buzz of their very own, mixing the polished pop vocals of singer Theresa Jeane with aggressive grunge-inspired instrumentals of Steve Tobi, Cory Walen, Kevin Koelsch, and Brandon Barnes. The Nearly Deads have managed to create a truly unique genre that not only gives a nod to gritty grunge, but brings it back in a way never heard before. Imagine Kelly Clarkson as front-woman of the Foo Fighters.

The band caused a stir when the music video for their song “Never Look Back” led to a viral outbreak, resulting in nearly 5 million views on YouTube. That buzz continues to grow every day, partly due to the social networking prowess of the band members themselves.

In a statement to fans, the band says, "We were very excited when Neil (Sheehan, founder of Standby) initially approached us about signing with Standby Records. We are a driven band and we only work with people who have the same passion for our music as we do. After hearing everything Standby had to offer and their vision for our band, we were convinced that it was the right move. Standby respects all the hard work we've done as an independent band, and they respect our fans! We believe signing will help us reach a level that we could not reach on our own. They have a dedicated and talented team, and we look forward to working with them. We can't wait to take this journey, and we are so lucky to be a part of the Standby family!"