Shattering the Glass Ceiling: A Conversation with Brooklyn Allman of Picture Me Broken 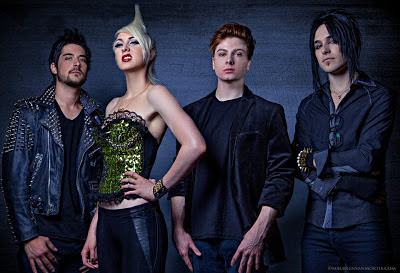 Picture Me Broken are not just another female fronted rock band. They are a unit hell bent on changing the entire ethos of the genre. Yes, they are fronted by Brooklyn Allman, daughter of Allman Brothers founder Gregg Allman, but that isn’t something this band lets define them.

They are a band poised to take the rock game by storm with their hard-charging, straight-ahead approach, which you can hear on their latest release, the Mannequins EP released last year, and are showcasing their on-the-cusp-of-greatness breakout feel right now in front of live crowds coast to coast on the Masters of Madness tour, opening for the almighty duo of Alice Cooper and Marilyn Manson.

Brooklyn recently took some time to sit down with Get eXposed to discuss her nerves as she shares the stage night in and night out with the shock rock giants, the difference between release EP’s and LP’s, what’s next for Picture Me Broken and a story that involves Brooklyn drinking absinthe with Manson in his ‘liar.’

Get eXposed Music: First and foremost and perhaps most obvious, what’s it like sharing the stage with the almighty Alice Cooper and Marilyn Manson? Are you nervous night in and night out taking the stage knowing they might be watching your set?
Brooklyn Allman: I don't think there any many more prestigious honors for a young rock band than getting to support timeless rock icons like Cooper and Manson. They've both been incredibly supportive of Picture Me Broken so far on this tour so that certainly made the nerves subside quickly. I would be lying if I said I wasn't the slightest bit intimidated at first. 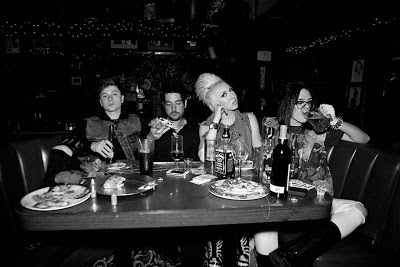 Tell me about the interactions you’ve had with those guys. Good, bad, funny, indifferent? Any stories you can share?
A couple shows into the tour a crew member of tapped me on the shoulder and said, "Mr. Manson would like to speak with you," and led me to his "lair." It was like something out of a movie. I'll pop into his dressing room and drink some absinthe from time to time.

We have really been getting along with the other bands and crews. I was afraid we might be completely ignored as, well, we're really nobody yet, but everyone has treated us as equals, which is wonderful when you're hanging with artists and teams of that caliber. Coop came up to me 4 shows into the tour saying he'd just found out who my dad was - I thought that was a testament to us earning the opportunity on our own.

For fans who might not know who Picture Me Broken is, what can they expect from you when they come out to see you on this tour?
We're not a band that has production, lights, fog and pyro (yet), but we will play the shit out of some rock n roll. I chose my band members strictly based on musicianship and a lot of people who see us live comment that we sound exactly as we do on the record and more often better.

What’s your set list look like for this tour? Any chance we’ll get an Alice or Manson cover tune thrown in?
I think that would be a bit cheesy, now wouldn't it! The only cover we rock at the moment is Heart's "Crazy On You" - in fact we close our set with it every night cause it's consistently a crowd favorite. We're playing songs more geared toward the new lineup with a little bit of old sprinkled in and some unreleased. 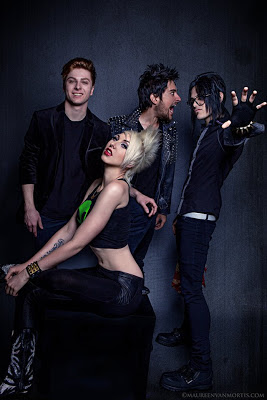 Let’s talk about Mannequins. What was the thought process behind releasing another EP after Wide Awake? Why not just go right to work on another full length?
The Mannequins EP was meant to foreshadow PMB's new sonic direction. We've gone through some dramatic lineup changes since the last release as I started this band when I was very young and had to take the time to build it in the right way. I think it's primarily a definitive departure from the "screamo" and "metalcore" scene, but that's not to say I'm done with scream-y vocals, we're just simply ready to define ourselves as a rock band and take any sort of trendy stamp off our foreheads. We had intended for the session of Mannequins to be what was to be a full length entitled Corrupt Me, but instead it was broken off into an EP in a situation that was completely out of our hands. The silver lining is that the full length will only be bigger and better when it does come out as we've grown as a band immensely from touring so much.

How on Earth can you follow up touring with Marilyn Manson and Alice Cooper? What’s next up for Picture Me Broken?
We're hungry to get into the studio and create the best LP we're capable of. We're aiming to be the change we want to see in rock n roll in the studio this time around.

What do you guys like to listen to while you’re out on the road?
We all listen to different music, but I personally spin quite a lot of IAMX/Sneaker Pimps. I also enjoy Finnish rock and lately a lot of Guns N Roses and Motley Crue.

Anything else you’d like to add? The floor is yours.
Picture Me Broken is not a "female-fronted band" - we are a rock n roll band.