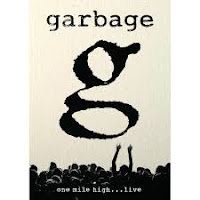 Outside of their fifth studio album Not Your Kind of People, released last year, Garbage has been largely dormant for the past eight years. But, do not let that coerce you into thinking this band has lost a step, or that they have any sort of onstage rust. That’s simply not true, and if you need proof, simply pop in their latest live DVD offering, One Mile High…Live, recorded at Denver’s Ogden Theater in October of 2012.

One Mile High…Live finds the band in a somewhat intimate setting, performing a mostly stripped down show in which their music, most of all, is spotlighted front and center. The band offers something for every era of Garbage fan – whether you the oldest of old schools and still rock the band’s eponymous 1995 debut (“Only Happy When It Rains,” “Vow,” “Milk”) or you showed up late to the party with the bands 2012 release Not Your Kind of People (“Automatic Systematic Habit,” “Blood For Poppies,” “Battle In Me”). Rest assured however; those afore listed tracks are not the only standout moments of One Mile High…Live, as the band shines brightly (an oxymoron if you think about it – Garbage and bright) during cuts such as “I Think I’m Paranoid,” “#1 Crush” and “Push It.”

There are some minor bonus features including the bands pre-show warm-up, aka soundcheck, and a pair of music videos (“Big Bright World,” “Blood for Poppies”), but that’s not where the strength of One Mile High…Live lies, the strength of this release lies in the bands onstage sonic output throughout.