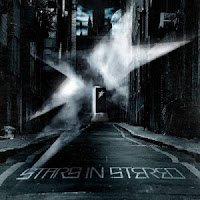 Female front rock bands are seemingly all the rage nowadays, so much so that it’s become increasingly more difficult to stand out within the genre. And if you’re going to standout, you have to certainly be talented, and you better make damn sure you put your best foot forward. Well, apparently Stars In Stereo got the memo, because not only do they possess said necessary chops, led by the uber-talented Bec Hollcraft, the band definitely puts their best foot forward on their eponymous debut with opening salvo “The Broken,” the first of the albums many highlight moments. While the comparisons are inevitable (Flyleaf, We Are The Fallen, Halestorm), Stars In Stereo prove themselves worthy via brooding melodies and sulking histrionics (“Open Your Eyes,” “Red Eyed Romance”), memorable vehicles driven by Hollcraft’s beautiful and powerful voice, though her sheer ability and uncanny range is no better showcased than on Stars In Stereo’s closing opus, “Queen of Catastrophe.” While technically the band’s debut, there’s nothing novice about Stars In Stereo.