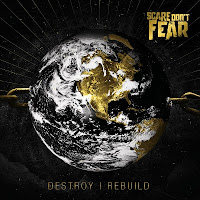 Life is all about trying new things – you know, variety is the spice of life and so on and so forth. This adage could very well be the credo of Scare Don’t Fear, who, just as those before them like downset., One Minute Silence, and Rage Against the Machine, set out to do something different. This isn’t rap-metal, this isn’t rapcore, this isn’t rap-rock, and this sure as hell isn’t Limp Bizkit.

The bands forward thinking amalgamation of rap, hip-hop, metalcore and deathcore is unlike anything else you’ll hear kicking around your record collection, thanks in large part to the vocal stylings of rapper Chris Jungles and screamer Frankie Sbacchis, who perfectly play off of each other with every passing note. There’s an undeniable swagger to Scare Don’t Fear’s game, which smacks you directly in the mouth right away with the opening track "Destroy," the perfect representation of what’s the come as you delve deeper into Destroy Rebuild. The combo of Jungles smooth flow and Sbacchis’ shattering growls take center stage on “The Stick Up,” while the rest of the album is an unending crashing tsunami wave of crippling metalcore (“D.T.M.,” “Sharks In the Water”), except for “Dominate,” which sees Jungles step into the spotlight to do what he does. After hearing him spit, there may not have been a more apt title for this track.

Destroy Rebuild could easily supply the soundtrack to your next house party, though you might want to clear out your living room because a spontaneous mosh pit is inevitable.