Reviewed! Louder Than Bombs - What Resonates 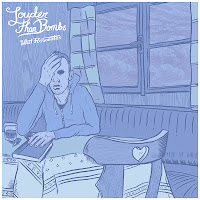 Even with the obvious Hot Water Music worship, Louder Than Bombs is a band to watch, and no, it’s not just because of the overt Smiths reference. Alternating between gruff melodic hardcore and sparkling pop, the band’s latest release What Resonates is an enjoyable nugget of a record, and in typical pop punk fashion the album fires on all cylinders right out of the gate with the high octane opener “Haunted.” While it doesn’t possess the same breadth as much of what’s yet to come on What Resonates, the opener perfectly sets the tables for what lies ahead on What Resonates. There is no shortage of material easily classified as catchy as hell (“No News Is Good News,” “Tense”), though Louder Than Bombs doesn’t keep things in one gear the whole way through. Yes, the band is good at crafting bouncy pop-punk sure to get your head nodding, lips moving and toes tapping, but the finer moments of What Resonates might just come when the album does it best to make itself accessible to every listener (“Reveal Itself,” “Banish”). What Resonates gives the band a nice base to build off on in the future, and yes, there are things that need a bit of tweaking, though it seems to be nothing more than merely a tightening the screws. Yes, Louder Than Bombs does owe more than a tip of the cap to Hot Water Music, but their sound also leans towards bands like the Draft, Fireworks and Set Your Goals, and to be honest, What Resonates should quickly carve itself out a niche alongside those bands’ releases in your record collection.