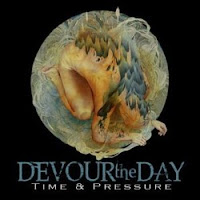 Attention rock bands far and wide, Devour the Day has arrived, and they’re fucking legit. Sure, DVD rose from the ashes of Egypt Central, but keep in mind that this isn’t Egypt Central 2.0, hell this isn’t even Egypt Central 10,000.0 – this is something entirely different from EC, something inherently better.

Just one song, “Respect,” off their debut effort Time & Pressure, DVD have put an emphatic stamp on their arrival on the rock scene, instantly making the band one to watch. If this opening track doesn’t give you goosebumps and make the hair on your arm stand up, then you clearly need to be listening to something else.

To be honest, the real challenge of Time & Pressure is to find a bad song, one that could be classified as filler – good luck. You’ll be hard-pressed to complete that challenge because the deeper you delve into the album, the more you’ll realize that this is an album concisely stacked with 11 of the best rock tracks you are going to hear this year because hard rock tunes oozing badassery sure to get your fist pumping and blood pressure rising (“Respect,” “Good Man,” “Get Out Of My Way”) and tracks coated in a radio ready sheen (“Move On,” “Oath,” “Reckless”) litter Time & Pressure’s tracklisting.

If Time & Pressure is only the first step, then Devour the Day’s ascension to the top of the rock ladder should be short lived. Be warned, once you start Time & Pressure you’re going to have to eventually press the stop button, though there’s a very good chance that that won’t be until after three, five, a dozen spins. You’re not going to want to stop listening, but you’re going to have to sooner or later, right?

Grade: A
Go Download: “Get Out Of My Way”