Reviewed! Death Of An Era - The Great Commonwealth EP 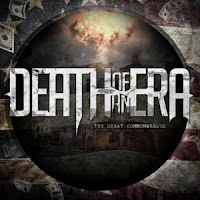 Death Of An Era

Metalcore is often looked at as something of a four letter word, an oft-maligned genre that is mostly seen in an unfavorable light. Well, enter Death Of An Era, who seek to dispel those pre-conceived notions and labels with their EP, The Great Commonwealth. The new six song offering, the bands follow-up to their Reviler EP, takes traditional metalcore and gives it’s a tech-math makeover, a sound that, to be honest, probably isn’t for every listener.

The stars of drummer Michael Cooper and frontman Daniel Simpson shine the brightest. The former comes across as a wall of sound, a sheer unstoppable force only rivaled by the front and center voice of the latter, whose vocal wares are on display right from the top on “Create, Sustain,” a cutting opener that showcases the guttural low-end of his abilities. On the flip side, “Shapeshifter” shows what Simpson can do on the other end of the vocal spectrum, with a clean vocal hook that might just be best on The Great Commonwealth EP. There are some tracks (“The Helpless Settlement,” “American Dictation”) that don’t quite live up to others (“P.O.S.,” “A Mothers Love”), but for the most part The Great Commonwealth EP is a situation of where the pros outweigh the cons.

It’s hard to find fault with Death of An Era trying to do something different with the done to death metalcore sound, though be warned because, as mentioned, The Great Commonwealth EP isn’t for everyone. But, if you do give this EP a chance, yours will be time well spent. Just give it a few spins and you’ll see for yourself.