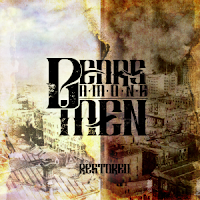 Here are two quick takeaways from Bears Among Men’s Restored EP – it’s hard to imagine that these Californians have only been together since 2009, and it’s even harder to imagine that this EP is their merely their debut. They don’t take long to kick into a sonic fury reminiscent of …An Ocean Between Us-era As I Lay Dying on stellar opener “The Archives,” an almost AILD-lite sound which perpetuates the foundational core of Restored, with the structure of nearly each song following the clean hook/guttural verse formulaic blueprint (“If You Could See Us Now,” “Call Me When You’re Close”). With the help of Taylor Voeltz from Mureau, Bears Among Men have created a hulking, snarling monster in “From Fall Comes Rise,” though it pales in comparison to the sheer ferocity and utter intensity of fitting closer “Vultures; Vessels.” Bears Among Men have a bright future ahead of them, and if the Restored EP is any indication, all signs are pointing to them not being unsigned for too much longer.