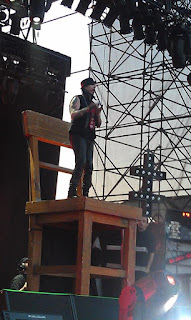 Who: Marilyn Manson/Picture Me Broken
Where: Buffalo Outer Harbor
When: 6/14/13

Concerts are a fluid thing. You never really know what’s going to happen
in the live arena. For the most part shows go off without a hitch, but every once in a while something goes awry, and unfortunately Picture Me Broken were the recipients of such an occurrence. 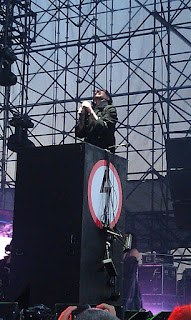 The crowd was beyond amped as Brooklyn Allman and her band of merry men took to the stage to kick off the Buffalo stop of the Masters of Madness tour to set the stage for shock rock giants Marilyn Manson and Alice Cooper, but the bands set took a downward spiral from there on in. 20 seconds into the bands set the power went out. Drummer Shaun Foist tried to fill the downtime with a drum solo, but due to the sound issues not the entire crowd could hear him. He did throw out about 25 drumsticks to the very eager crowd. Speaking of, the crowd took it upon themselves to provide entertainment, as a rousing sing-a-long of ‘The Star-Spangled Banner’ broke out. The band was thankfully up and running after about 10 minutes, and hit the stage with “Torture” and “Holy Drug” though it wasn’t too long before technical difficulties crept up once again. A song later, as the band was set to rock out “Skin & Bones,” Alman informed the crowd their set was to be cut short, and that was it. They then left the stage to a chorus of boos as people around me were saying “This sucks, I was really digging their sound.” The sound was off for the little while they were onstage, and it sounded as if the stage crew were trying to compensate volume-wise by cranking the low-end though it just ended drowning out a lot of the guitars and drums. 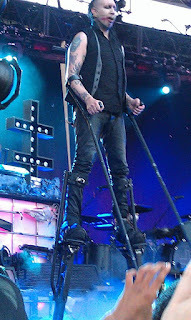 Still, the band were troopers, and hung around at their merch tent, signing autographs and taking pictures for any and all who were interested, and judging by the line, a lot of people were. They also sold out of copies of their Mannequins EP, which was goo
d to see.

Unfortunately for the crowd however, we had to wait for a good hour before Marilyn Manson took to the stage. At least it gave me ample time to check out the merch. 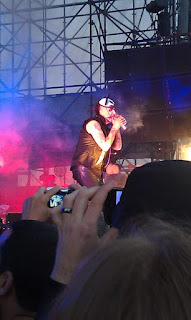 From the outset, opening with the tremendous “Angel With the Scabbed Wings,” Marilyn Manson was a dominant force, commanding the stage and controlling the audience with a stacked setlist full of corwd-pleasers like “Disposable Teens,” “The Dope Show,” “Personal Jesus,” and “This Is The New Sh*t.” Manson utilized his trademark onstage props as well, bringing out a giant wooden chair for “mOBSCENE” and giant mechanical stilts for “Sweet Dreams (Are Made Of This).” At one point he even threw a cake into the crowd and they didn’t seem to mind, nor did they mind when he brought out a fake snow machine, something Buffalo definitely does not need, for “Great Big White World.” The crowd went insane as Manson stepped to a giant podium for “Antichrist Superstar” to end the set, before awkwardly leaving, then encoring with “Beautiful People,” much to the crowd’s delight.

My two takeaways from the Buffalo stop of the Masters of Madness tour are – 1) I hope Picture Me Broken find their way to the Queen City soon, and 2) Manson is beyond comparison.
Email Post
Labels: concert of the year concert reviews live reviews marilyn manson picture me broke