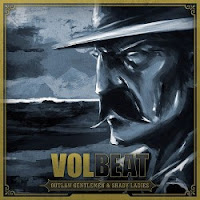 While the term mainstream could be used to describe Volbeat’s latest album Outlaw Gentlemen and Shady Ladies, its less a detrimental four letter word and more a strength. With this new album, the band seems hyper-focused, and their target in rock radio. While Volbeat was able to crack radio waves with their last release, Beyond Hell/Above Heaven, Outlaw Gentlemen and Shady Ladies is a record full of tracks that will make them a mainstay there for week and months to come. Volbeat brings the heavy on this album as well, calling in the services of King Diamond (“Room 24”) to help do so, but the fact is, the band can do heavy just fine by themselves (“Doc Holliday”). Sarah Blackwood also guests on “Lonesome Rider,” adding another layer to the spectacular rockabilly tune, and she effectively brings out the best in frontman Michael Poulsen. Former Anthrax guitarist/The Damned Things bassist Rob Caggiano proves a welcome addition to the band and his impact felt immediately up and down this track listing. Listen to Caggiano’s contribution during the opening stanza of “Dead But Rising,” as well as his stunning fretwork on a pair of standouts in “Lola Montez” and “Cape Of Our Hero.” While it’s definitely a point of contention, it could be said that Outlaw Gentlemen and Shady Ladies is Volbeat’s brightest moment, and whether or not you’d be willing to cast your vote for this album or  Beyond Hell/Above Heaven, or any other Volbeat release for that matter, there is no arguing the fact that Outlaw Gentlemen and Shady Ladies is nothing short of tremendous.