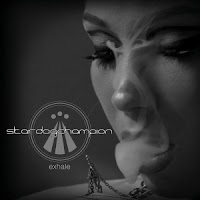 They say you can never go home again, but Aaron Fink and Mark James, formerly of Lifer and Breaking Benjamin, are out to prove otherwise, reuniting with Lifer frontman Nick Coyle in Stardog Champion.

For those unfamiliar with the bands prior affiliations, specifically Lifer (if you’re a rock fan and have never heard of Breaking Benjamin, what the hell sort of fan are you), go back and spend some time with the bands 2001 eponymous debut, and if you do, stick around a few minutes after the final track for the heartbreaking and immaculate “Perfect,” a track that showcases Coyle’s range as both a singer and a songwriter. But that was then and this is now, and it’s clear that Coyle’s voice has only gotten stronger with time, evolving with an air of maturity that’s pretty overt on the Exhale EP.

There’s some strong Incubus love running rampant throughout the Exhale EP, and a big hi-five and bro hug goes out to those educated ears that picked up the Audiovent undertones. Good things certainly do come in small packages here as at a mere five tracks, the Exhale EP makes an impact with no shortage of worthy cuts like “Aphrodite” and “When We Fall.” Closer “The Switch” sounds like a b-side plucked from the recording sessions of Incubus’ A Crow Left of the Murder… or Light Grenades, a song that could do damage at radio immediately if given the opportunity, a blanket statement that really best describes the Exhale EP as a whole.

When all is said and done, the Exhale EP does more than enough to classify Stardog Champion as a band to keep an eye on. And yes, in case you are wondering, there is plenty of room on the bandwagon, and there’s no time like the present to find yourself a seat.