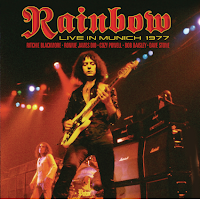 Rainbow’s Live In Munich 1977 finds the band performing in about as raw a setting as they possibly could perform in. There’s not really much production value here to speak of, and to be honest that’s a strength of this live release. Live In Munich 1977 is brimming with towering 1970’s rock, including some of the best renditions of these songs Rainbow has ever performed (“Sixteenth Century Greensleeves,” “Kill The King,” “Mistreated,” “Catch the Rainbow”), though it’s really not until the second disc of this set that Live In Munich 1977 really takes off. A brilliant rendition of "Man on the Silver Mountain" clocking in at nearly 15 minutes is followed by a thrilling 25-minute "Still I'm Sad.” And that’s not even to mention the excellent "Do You Close Your Eyes” which closes out these festivities. Live In Munich 1977 is all things fast and loud, it’s the type of unfettered controlled chaos that could only come out of the ‘70’s and only come off blazing off the guitar from someone like Ritchie Blackmore.