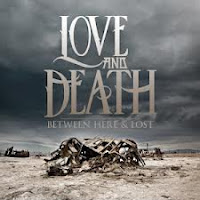 The old saying goes, ‘if it ain’t broke, don’t fix it,’ which is quite the case for Brian ‘Head’ Welch and new band Love & Death. There’s another old saying that applies here as well, ‘dance with what brought you.’ Throughout his career Welch has employed a knack for the stylings of nu-metal, a sound he doesn’t abandon on Love & Death’s debut Between Here & Lost. Welch is no stranger to nu-metal so that’s what you get here, though that’s not all you get. From the opening of “The Abandoning” as Welch says ‘Wake up sleepy/wide awake’, Between Here & Lost presents a number of chugging steamrollers driven by massive riffs (“Paralyzed,” “Meltdown”), but there are moments of variation (“I W8 4 U,” featuring For Today’s Mattie Montgomery, “Bruises”) that serve to break any monotony you might encounter. And how could the bands cover of Devo’s unforgettable “Whip It.” It’s different to say the least. Welch is right at home with a microphone in his hands, becoming the next talented guitarist to step from the side of the stage to the center, follow others such as Wes Boreland (Limp Bizkit – Black Light Burns), and Brandan Schieppati (Eighteen Visions – Bleeding Through), to name a few. At the end of the day, Welch took what he learned and perfected in Korn and made it better, and to be honest, Between Here & Lost is superior to anything the former has released in the past decade.