Reviewed! Lordi - To Beast Or Not To Beast 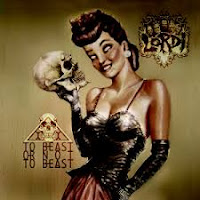 Though Finland’s Lordi owe a great deal to GWAR when they look in the mirror, the product they put to wax is more a mixed bag in terms of sonic output. The band’s latest, To Beast Or Not To Beast, finds the band tipping their surely outrageous hats to the past, kicking things into a high gear early on with the 80’s hard rock inspired opener “We Not Bad For the Kids (We’re Worse),” though, for the most part, To Beast Or Not To Beast spends it time treading the murky waters of goth-horror rock (“Something wicked This Way Comes,” “Horrification,” “Schizo Doll”). Lead single “The Riff” is a pure standout due to its thunderous riffs (you’d assume a song named “The Riff” would have to have tremendous guitars) and vocally driven hooks, a beastly description that could also be used to describe another one of the albums heaviest moments, “Happy New Fear.” The album is closed by the instrumental track (an interesting decision for sure) “SCG6: Otus’ Butcher Clinic,” the sixth such installment of the bands “SCG” (Scarctic Circle Gathering) series, though it’s the penultimate “Sincerely With Love” that might just be one of the most memorable cuts off To Beast Or Not To Beast, due to its insistent, pounding chorus that is probably best heard by your own ears in order to believe. If you like your hard rock/metal mixed with substantial horror overtones and just the right amount of idiosyncrasies, then not only is Lordi right up your alley, To Beast Or Not To Beast is a record for you to hear.