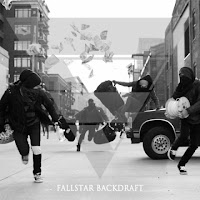 With Backdraft, Fallstar’s sophomore album and first release for Facedown Records, the band has made some changes. Sure, it’s a little disheartening to see the band shed most of their old school hardcore stylings, but the new school metalcore sound the band has adopted bodes well for their already bright future. They have tightened the screws, most notable on the mic with vocalist Chris Ratzlaff, who has never sounded better. Also, the band cranked the amps to 11 for Backdraft, as it clear this is flat out the heaviest they’ve ever been. While opener “Malbec Blood” washes the listener in a bit of a false sense of security, the subsequent “Shallow Believer” shatters that safe feeling thanks to the vocal contributions of Memphis May Fire’s Matty Mullins. Throughout Backdraft, Fallstar’s new found love of all things metalcore is on full display often (“El Rey,” “Drags, Drugs and Bones,” “The Valley,” “It’s In Our Blood,” “Set My Face Like Flint”), but the singular sound isn’t all you’ll get as you traverse these tracks. Fallstar even try their hand at melding rap and metalcore with “Alexandria 363,” teaming with Living Wtiness for the revolutionary outing. And yes, it actually works, which might just be the most surprising aspect of Backdraft. This is a concept that’s been explored before but it’s never been achieved at this level, as the duo just seems to click on all levels throughout the clear standout track. Yes, Fallstar embraces a sound more metalcore-leaning on Backdraft, but those who listen to the record will hear that it works, and it works pretty well. This is a release well worth your time, one that proves the band has grown in every sense of the word.