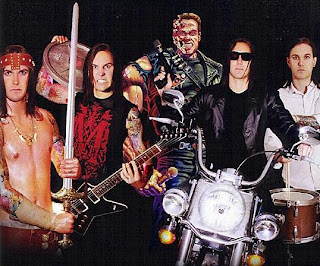 If you’re reading this and are a fan of As I Lay Dying, then there is a better than good chance that you’re aware of singer Tim Lambesis’ side-project, well one of them, Austrian Death Machine. After Total Brutal and Double Brutal, now comes Triple Brutal, the next chapter of Lambesis’ sheer man-love for all things Arnold Schwarzenegger and his classic action flicks.

Get eXposed: Talk to me about Indiegogo. Tell me, why crowdfunding? What drew you to it, what’s the allure of it, benefits, etc.
Tim Lambesis: In the case of a band that is already established, crowdfunding is a way to further connect with the fans. Unless it’s a band that is inconsistent or changes its style, the fans know what to expect. Then, besides the preorder of the release the fans are given opportunities to get unique perks. It’s common to buy a CD or digital download, but how else would be able to get dinner with one of your favorite artist? Or, in this case, work out with me (laughs).

How did you come to land on Indiegogo over say Kickstarter or GoFundMe?
To be honest, I went with IndieGoGo because their fees were lower than Kickstarter. Also, the rep seemed really hands on and personal. Garrett over there helped me launch everything and fine tune some of my wacky ideas.

And by the way, you’re Tim freaking Lambesis. Do you really need crowdfunding?
Believe it or not, even the most successful musicians in our genre are still underground musicians in the big scheme of popular music. There are all kinds of rumors on the internet concerning the kind of money I make. I wish they were true (laughs)! I still have a hard time paying my bills. Kids are expensive (laughs)!

Tell me about some of the rewards available for those who donate to the project. Also, are you really willing to tattoo your ass for $5,000? Do you expect anyone to take you up on the offer?
It’s true! Besides getting your name or initials tattooed on my butt, there is a cool “All Snaccess Pass” where we go out to eat after a concert. There’s also some personal trainer workout packages. More commonly, there are some creative shirts and vinyl too.

Will the fact that your fans are funding Triple Brutal affect your process on the album?
There will be a fan guest vocalist, but besides that, no. 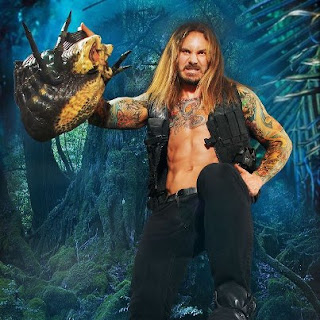 And speaking of your process, how will the recording process differ from the first two times around with Austrian Death Machine?
The first two albums were basically written entirely by me. This record has a lot of guest musicians who co-wrote songs with me. As a result it’s more interesting and more diverse.

Have you started writing the album? If so, how far along are you?
I pretty much have the album written and have even recorded chunks of it. I just need to finish it. I can’t wait!

What Ahnold adventures are fueling the inspiration for songwriting this time around?
I always come back to Terminator 2 since it’s tied for being my favorite of his movies. This album is the first to have a song from Red Sonja though as something different. In true Arnold loving fashion, there is a pretty good variety. A noteworthy quote of Arnold’s is “the best activities for your health are pumping and humping”.

On your Indiegogo page, you say – “I have another idea in mind to do a project on the more serious end of the spectrum.” Can you elaborate at all?
I can’t elaborate too much right now, but I can say that I would love to documentary focusing on the orphan crisis a lot of countries face.

After Triple Brutal, the next step is to head out on tour? Will that be crowdfunded as well?
I’d like to do an ADM tour, but I can’t promise it’ll be super long. That partly depends on what type of funds we have left over after finishing the album.

With more and more name acts turning to crowdfunding, do you think this is the way of the future?
I wish it was for established bands that fans can trust. The idea needs to be refined a bit more though. At the current rate, bands might burn out fans because some bands don’t deliver as awesome of a product as fans are expecting. In my case, I intend to exceed expectations!

Do you think crowdfunding could possibly replace the need for record labels down the road?
Developing bands won’t be able to crowdfund a significant amount of money and it takes marketing money to cause awareness for a new band. 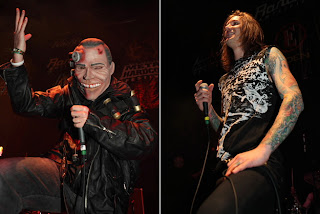 Do you envision a future where crowdfunding is something As I Lay Dying turns to?
I wouldn’t mind doing a special project like an EP. Overall we have a good relationship with Metal Blade though and are happy for the time being. It’s hard to say what the future will hold though.

Speaking of AILD, if you don’t mind me asking, will we see a Frail Words Collapse 10th Anniversary tour this summer? I, for one, am sincerely hoping so. And please, if you’re not thinking about it, could you think about it?
I want to do something for it, but no one from our management team or label has really jumped on the idea yet with any ambition when I send out an email about it. We have some summer tour plans and I think the best compromise is to set aside a portion of our set to celebrate by playing some Frail Words Collapse songs.

Anything else you want to add? The floor is yours.
I’m sure I sound like a busy body, partly because I am, but I want to make sure everyone knows about my new death metal band Pyrithion. I’m really happy with the EP, which is out now.