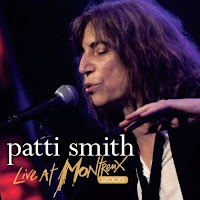 Patti Smith’s Live at Montreux 2005 is a no-frills DVD full of Patti Smith being Patti Smith, one built for the hardcores due to its simple construction. If you want to get in, watch a short but very sweet live set of Patti Smith material, and get out in relatively short order, then Live at Montreux 2005 is the release for you. This DVD houses a dozen tracks, a smooth mix of cover tunes places her own stamp on, including Buddy Holly's "Not Fade Away" and Bob Dylan's "Like a Rolling Stone,” as well a number of originals such as “Dancing Barefoot,” “Free Money” and “Beneath the Southern Cross,” tracks driven by Smith’s noteworthy, smoky, sultry vocals, the same vocals that made and have kept Smith a star for the past half century. The true highlight is “Because the Night,” a tune co-written by Bruce Springsteen, which Smith does a nice job putting her own sheen on for this night. Live at Montreux 2005 exudes soul, and even though there’s no bonus or extra content offered, this live set is strong enough to stand on its own.