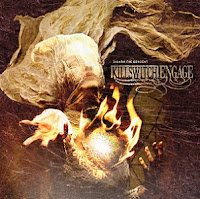 There has always been that argument amongst Killswitch Engage fans: Jesse Leach or Howard Jones? The argument usually ended with “I would like to hear what Jesse would sound like now with them”.  We finally have that and I for one am quite pleased. Killswitch has definitely come at us hard with Disarm the Descent, their first full length in 4 years, and this album is nothing short of my expectations.

Disarm the Descent opens with “The Hell in Me,” well, opens is an understatement, because for lack of a better term it “bursts” with the opening track. Between Adam Dutkiewicz and Joel Stroetzel’s guitars, Jesses’ vocals and Justin Foley’s ridiculous drum beat, this tune couldn’t have been better selected to be the first thing we hear after pushing play. It kind of makes the listeners attention its bitch.

From the melodic sounds of “Beyond the Flames,” the brutal sounds of “The Turning Point,” to the deep lyrics of the album’s first single, “In Due Time,” the album is a perfect example that real metal is still out there. Killswitch Engage is been feeding our heavy music needs for a little over a decade now and with the return of Jesse Leach, they show no sign of stopping. If anything they have picked up some steam.

Although to me, the album can seem a bit generic at times; it still is a nonstop freight train of killer riffs, melodic, yet brutal vocals and a tight rhythm section. When you combine all that you get really amazing music. Killswitch Engage knows that formula well as they have proven again with this album. I know I said the album can seem generic, but that isn’t always a bad thing. Killswitch Engage has given us some new material and it is everything I would expect it to be. Beginning to end, the album is as exciting to listen to as the anticipation of new material from these guys was. In a metal world filled with whiny vocals, predictable instrumentals and extremely overdone blast beats, Killswitch Engage delivers us something that is just shy of perfection. This album is a must have for anyone who appreciates a band that has stayed true to its roots over the years and I am looking forward to seeing these songs played live this summer.