Reviewed! Hope for the Dying - Aletheia 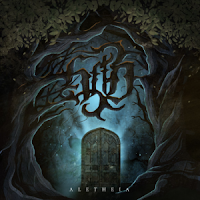 With Aletheia, Hope for the Dying effectively build upon the momentum built off their tremendous debut Dissimulation, while proving that less is more for the most part. While these songs don’t really do all that much to stand out from one another, causing Aletheia to suffer a certain lack of distinction, they do however leave a lasting impact. A good portion of the record is driven by an immersive duel guitar attack from James Houseman and Jack Daniels (“Acceptance,” “Reformation,” “Iniquitous”), and listeners beware – make sure you settle in from the get-go before the afore mentioned “Acceptance,” the opening cut off Aletheia, clocks in at over nine minutes. Powerful orchestral elements persist throughout Aletheia, making for the record’s standout tracks – the commanding, possibly Celtic-inspired “In Isolation,” stunning instrumental interlude “Through a Nightmare, Darkly,” and the sheer soaring, epic closer “Open Up the Sky.” As a matter of fact, the final three tracks (“The Lost,” “Visions,” “Open Up the Sky”) is perhaps where the album shines the brightest, building a strong crescendo from the outset of  “Visions,” that continues through the piano outro of the closing track. Aletheia is not for the faint of heart. With a handful of tracking surpassing the ten minute mark, this record is an investment, both of your time and your attention. Fans of Dissimulation would do well to seek Aletheia out, if for some reason you haven’t already, but keep in mind that it’s not quite the same experience. Aletheia is Hope for the Dying’s most profound work yet, but it might take some time for you to fully realize it.