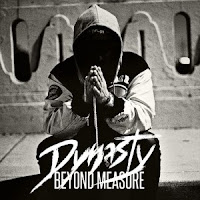 Listen, everyone knows hardcore has a boundless list of sub-genres, from Christian and melodic to death and post, but Dynasty is none of those. Just as there is New York City hardcore, Dynasty is So-Cal hardcore, pure and simple. Not that Beyond Measure needs to come with a warning label, it should be known that this shit is heavy – very heavy. This record is sudden, its abrupt and to the point, an album that packs a wallop, one that’s all killer and little to no filler. With most, if not all, tracks timing out at under 2 minutes and even some under one, Beyond Measure is a record rife for immediate consumption. Beyond Measure features a slew of guest spots, including Wu-Tang Clan’s Inspectah Deck (“Get Live”), Terror’s Martin Stewart (“Savage Mind”), Sleeping Giant’s Tommy Green and Stick To Your Guns’ Jesse Burnett (“Rise to Victory”)and Agnostic Front’s Roger Miret (“Hard Pressed”), a number of unique collabos that just add to the sheer enjoyment factor here. Beyond Measure is more than a collection of guest appearances though, much more. You might not want to play this album too loudly because there is a good chance it could incite a pit nearby, due to any number of floor-punching agro-monsters (“Omni-Death,” “Death Solution”). Beyond Measure serves notice to all other hardcore acts – this shit is legit, and it is menacing. As a fan of hardcore or a fan of pretty much anything fast and loud, Dynasty is a name that should be on your priority list, and Beyond Measure is a record that should be on your purchase list.