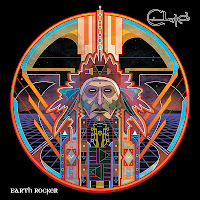 If you can count on anything in the ever-changing music industry, you can count on the fact that Clutch is going to be Clutch, and any time they release a new album, you know this band is going to sit back and do their own thing. This is a trend that continues for sure on the bands tenth studio album Earth Rocker, which proves that the Southern rockers have plenty left in the tank. For the most part, the album is what you’d expect from the stoner rock vets, one that fires off one ripping outing after another (“Mr. Freedom,” “Cyborg Bette”). With Earth Rocker serving as Clutch’s first album in nearly half a decade, it’s perfectly reasonable to see them go back to a back-to-basics approach with safe sounding entries (“D.C. Sound Attack!,” “Crucial Velocity”), but the band does a great job in breaking up any potential monotony on Earth Rocker with a few standouts, namely the churning, blues number "Gone Cold” and the jam rock-esque closer “The Wolf Man Kindly Requests...” The efforts of longtime frontman Neil Fallon should not be overlooked thanks to his no-frills songwriting and penchant for generating one-hell of a sing-a-long hook. Earth Rocker really is a beast of an album, one that will not disappoint those who have been anticipating this release since 2009’s Strange Cousins from the West. While it may be business as usual for Clutch, this album proves that business is good, so damn good in fact that when the end of 2013 rolls around, Earth Rocker should be a staple of many Best Of lists as quite possible the years top stoner rock release.