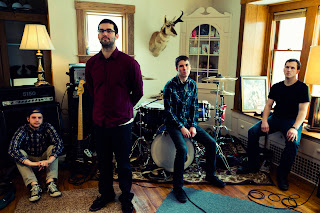 Light Years is proud to announce its signing to Paper + Plastick Records.

"Parking Lots" and "Put Myself Together" are tracks that will be available on Light Years' debut full-length record, I Won't Hold This Against You, which will be released via Paper + Plastick later this summer.

Light Years previously released an EP titled Just Between Us in April 2012 via Escapist Records. The band's rollicking pop-punk sound comes through better than ever throughout the course of I Won't Hold This Against You, which was produced by Will Yip (The Wonder Years, Circa Survive, Title Fight).

This is evident in first single "Parking Lots," a super-charged wave of nostalgic lyricism. Lead vocalist Pat Kennedy reminisces about his youth in a way that is relatable to any 20-something. "I'm just letting it go before my past comes crawling back through my front door / I'll spend the rest of my days and nights just hoping for something more," he sings in "Parking Lots." We call it pop-punk for grown-ups.
Email Post
Labels: light years news paper +plastick signing