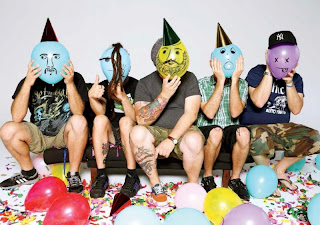 Ska-punk veterans Less Than Jake announced last week that they will be putting out a brand-new album this fall on Fat Wreck Chords.

The label released the following statement on its website:

"Looks like the team is officially back! Following the 2012 reissue of the Fat classic Borders & Boundaries and the subsequent EP collection Greetings & Salutations, it only made sense to bring Less Than Jake back into the Fat folds for real. This fall will see a brand new Less Than Jake album on Fat Wreck Chords, their first full length of brand new material since 2008.

As the statement says, the new full-length will be Less Than Jake's first LP release of fully brand-new material since 2008's GNV FLA. It will also be the first Less Than Jake release of full brand-new material on Fat Wreck in over 10 years! The band has been writing and demoing new songs in its hometown of Gainesville, FL, for the last few months and will begin recording at the top of May.

The new album will be the follow-up to the Greetings & Salutations collection, which is for sale in the band's webstore.
Email Post
Labels: fat wreck chords less than jake news signing