Death of an Era Joins The Artery Foundation/Razor & Tie 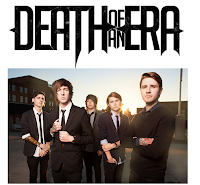 Death of an Era formed in 2012. After a year supporting their self-released Reviler EP, this collective of high school friends had risen out of the Ohio underground and into the national spotlight. Alternative Press featured them in AP&R, and they carved out a rabid core of fans through relentless touring and an incomparable sound. Confronting everything from child abuse and drug addiction to deceit and bullying head-on, the group—Daniel Simpson [vocals], Nathan Stewart [guitar], Dustin Colling [guitar], and brothers Chris [bass] and Michael Cooper [drums]—offer catharsis in the face of chaos.

The band is managed by Mike Milford and Thomas Gutches of The Artery Foundation.