William Beckett (The Academy Is...) Signs to Equal Vision 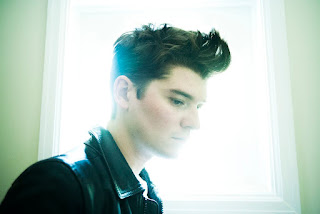 "I've been a fan of EVR and its roster since I was listening to The Stryder and Saves the Day in high school," Beckett shares. "For months I was approached by labels but after the first conversation I knew EVR was a perfect fit; I can make exactly the record I want to make."

After The Academy Is... disbanded in late 2011, Beckett to began as a solo artist. Returning home to his roots and family in Chicago, Beckett began pouring his heart and soul into a trilogy of EPs — Walk The Talk, Winds Will Change, and What Will Be, and the Pioneer Sessions album (a collection of twelve acoustic versions of songs from each of the EPs) — all of which was released in 2012.

Beckett's first single released as a solo artist, “Compromising Me” off of Walk The Talk EP, rocketed to the top of the iTunes charts, cracking the top 20 and leading all independently released tracks. In the following months, the official release of each of the three solo EPs followed suit in a similar impressively meteoric rise. Beckett's solo music embraces his expansive vocal range, pop sensibilities, quirky yet soothingly hypnotic melodies and distinctive narrative lyrical twists; Offering his most diverse stylings and personal material to date.

"Music is all about connection," Beckett expresses. "Performer gives to listener, listener gives back to performer. I respect my fans and their inevitable evolution of taste and experience. The only constants in life are change and the necessity of music. THAT is why I don't make the same record over and over again. I'm not trying to cater to an audience or lower the bar to some level of "relatability". I write real songs for real people about real experiences. The connection is the skin, the meat and the core. The whole apple."
Email Post
Labels: equal vision news signing william beckett