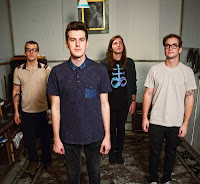 Paper + Plastick Records is excited to announce today the signing of Thousand Oaks, CA-based pop-punk act The Braces. The band will release its sophomore full-length record and first effort for Paper + Plastick, titled Two Years, on April 9 digitally. Vinyl will be made available by the label later in 2013.

Recommended If You Like: Early Saves The Day, The Get Up Kids, the Fat Wreck Chords catalog from the 1990s; a combination of The Beach Boys, Elvis Costello, The Buzzcocks, Bad Religion

"The Braces are someone's little brother," says Paper + Plastick Records founder Vinnie Fiorello. "They dove into their older brother's record collection that had a bunch of mid-'90s Fat Wreck albums, some '90s D.C. indie rock like the Dismemberment Plan and then whipped it into some modern pop-punk with early Saves The Day influences."

As "Vandal" shows, The Braces straddles many genres.

"We listen to a lot of punk, indie, '90s D.C. emo, and '70s power pop," says guitarist / vocalist Zack Sekuler. The first song from Two Years incorporates a slew of tempo changes, a huge chorus and a catchy drum rhythm all into one memorable track.