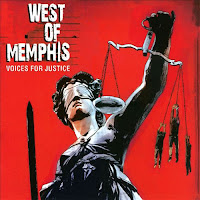 In you didn’t know because you’ve been living under a rock or in a cave somewhere, West of Memphis: Voices For Justice is the sonic accompaniment to the West of Memphis documentary, written and directed by Amy Berg, which chronicles the mystifying story of injustice surrounding three boys in West Memphis, Damien Echols (sentenced to death), Jessie Misskelley, Jr. (life imprisonment plus two 20-year sentences), and Jason Baldwin (life imprisonment), who were wrongfully convicted and imprisoned as teenagers in 1994 of the 1993 murders of three boys. In August of 2011, the trio entered Alford pleas, which allow them to assert their innocence while acknowledging that prosecutors have enough evidence to convict them. A judge accepted the pleas and they were released with ten-year suspended sentences, having served 18 years and 78 days in prison. West of Memphis: Voices For Justice chronicles the trio’s plight well with no shortage of highlight tracks, including Eddie Vedder’s “Satellite,” Citizen Cope’s “DFW” and Marilyn Manson’s ominous take on Carly Simon’s unforgettable “You’re So Vain.” It’s hard to ignore the bleak, yet powerful bookends of West of Memphis: Voices For Justice, which include Henry Rollins and Johnny Depp reading excerpts from death row letters written by Echols himself.  Natalie Wood’s take on Pink Floyd’s classic “Mother” and Lucinda Williams’ resilient “Joy” add a breath of life into West of Memphis: Voices For Justice, an uplifting release that plays more life an actual album than a compilation of mere songs. There’s a message here, one of sheer hope, determination and persistence – just press play to experience it yourself.

Grade: B
Go Download: Marilyn Manson - "You're So Vein"