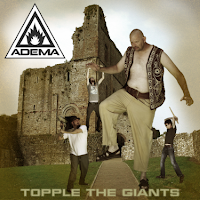 Topple The Giants is a reintroduction of sorts of Adema to the world, an EP that effectively seeks to breathe new life into a band that once dominated rock radio thanks to a pair of Top 20 singles (“Giving In,” “The Way You Like It”), one that has a Gold record to their name (Adema), and one that has not released a studio album in six years. Longtime guitarist Tim Fluckey has taken over lead vocal duties, becoming the bands fourth lead singer, and best since Marky Chavez, a statement easily proven during the bands reimagining of two of their most popular tracks ever, “Giving In” and “Unstable.” Topple The Giants showcases Adema’s capability to survive on opposite ends of the spectrum, with their ability to pen capable ballads (“Lions,” “Planets”) as well as succinct groove-laden hard rock cuts (“Topple The Giants,” “Immortal”). Even though there is some inconsistency along the way, which is to be expected for a band shaking the rust off, for the first the time in a long time it appears as if Adema have a bright future ahead of them, thanks in large part to the reenergized nature of Topple The Giants.