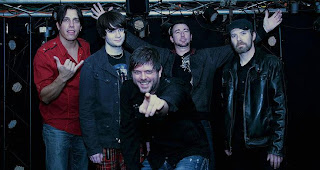 Goomba Music President Gregory Wier offers, "Pistol Day Parade is an 'All American Band' that we have witnessed the emergence of across Michigan. We feel it's now their time to shine. With the support we bring to the table, our collective successes will offer America a taste of what Rock and Roll is meant to be."

Vocalist Fuller adds, "It's not easy to find people who are really successful in the corporate world who bring the same drive and excitement and passion to the music business. We are extremely excited to have the opportunity to build a solid foundation for our musical hopes and dreams with Goomba Music steering the ship of Rock"

The band's debut EP She Wants More was released in late-2009, establishing the band as one to watch with sales approaching 15,000 copies. The lead single "Rockstar's Girlfriend," had an impressive debut at 38 on the Active Rock charts. The follow-up "High" also enjoyed a significant run of support, yielding airplay across the Midwest.

In the winter of 2010, the band continued to write and record demos that would become the band’s first full length album titled A NEW LIFE. In early 2012, the band set out to prove that the success of She Wants More was not a fluke, debuting the album live to a packed house of 3000 at the Fillmore Theater.

This past Summer, Pistol Day Parade enlisted Chuck Alkazian to remix the album, which yielded a #1 track at WRIF in Detroit with "Better.” They are placing their finishing touches on the band's debut on Goomba Music, planned for release Fall, 2013.

Bassist Jason Lollio shares, "We are all very excited to be a part of the Goomba Music family. It feels like we are at the right place, at the right time, with the right people! With the huge support of 101.1 WRIF we have accomplished a lot in our hometown of Detroit. Now with Goomba Music, it's time to spread our wings and fly. Look out, here we come!!!"