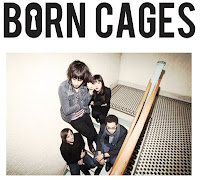 Razor & Tie announces the addition of the New York based indie rock band Born Cages to its label and publishing rosters.

Lead vocalist / guitarist VladHoliday, “We're extremely excited to be a part of the Razor & Tie family. It's clear that their passionate and hard-working staff truly share our vision and understand the songs for what they really are. It's been a great start with Razor & Tie so far and we are very much looking forward to releasing our debut album.”

Born Cages is currently in the studio with Jon Kaplan (Walk The Moon, Augustana) and Oliver Straus (Arctic Monkeys, Matt & Kim) at Mission Sound in Brooklyn, NY finishing up their debut full length album to be released later this year.

The New York City based Born Cages formed in 2011 (formerly called Electric Sun). Within one year the young band had already released an EP, opened two sold-out shows for Guns N’ Roses and shared stages with such bands as Gold Fields, Lights Resolve, and Ludo. The band has had music played on Q104.3 in New York and recently recorded a session at the Gibson NYC showroom that premiered on Purevolume. They were also featured on a large billboard in Times Square as part of a Toshiba promotion. Born Cages is Vlad Holiday (lead vocals/lead guitar), Amanda Carl (keyboards/backing vocals), Steve Kellner (bass guitar/backing vocals) and Dave Tantao (drums). Born Cages is managed by Strong Management and touring by Tim Borror and Bryan Vastano at The Agency Group.