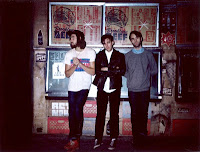 Warner Bros. Records is pleased to announce that it has signed buzzed-about New York City-based rock band Skaters to its roster. Their smart, dynamic sound blends their disparate new wave, punk and hip-hop influences into their own modern indie hybrid. Their live shows and independently released EP has already earned them attention from The New York Times, as well as airplay on BBC Radio 1 in the U.K. and Triple J Radio in Australia.

Skaters were formed in early 2012 after singer Michael Ian Cummings and Noah Rubin spent a year trading demos back and forth from Los Angeles to London with guitarist Joshua Hubbard. A few months later, the three met in a Chinatown loft to created their own art zine, Yonks, and record their debut EP, Schemers, which was given away for free on the band's website and drew immediate critical praise:

Skaters debut full-length will be released by Warner Bros. Records this summer. In the meantime, the band will release their first 7-inch single on April 9th, which will feature tracks "I Wanna Dance (But I Don't Know How)"and "Armed."