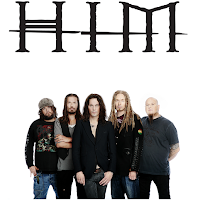 Razor & Tie announces the addition of the Finnish rock band HIM (His Infernal Majesty) to its North American label roster. The band has completed work on their forthcoming new studio album, Tears On Tape, which will be released on April 30th on Razor & Tie in North America/Canada and on April 29th on DoubleCross (Cooking Vinyl’s specialist rock imprint) in the U.K. and Ireland.

HIM lead vocalist Ville Valo comments, “We´re infernally glad to be dressed sharply enough for our dearest comrades in the U.S.(for once), R&T A-Go-Go!!!”

Razor & Tie A&R Executive Mike Gitter adds, “Few artists are able to tap into rock at its most emotional and forlorn and make it sound so damn uplifting and powerful. That's Ville Valo and HIM's stock-in-trade. They take the rawest of emotions and channel them into unforgettable anthems- invoking the spirit of great rock n roll in the process.”

Tears On Tape will be the “Love Metal” band’s eighth official album and was recorded in their home country with long-time producer Hiili Hiilesmaa and once again mixed by long time-band associate, Tim Palmer (U2, Ozzy Osbourne, Pearl Jam, Robert Plant).

Formed in 1991 by vocalist Ville Valo, guitarist Mikko “Linde” Lindström, and bassist Mikko “Migé” Paananen, HIM’s previous albums have seen them win a worldwide following, becoming the first Finnish act to achieve platinum sales in the U.S. To date HIM has sold a combined 1.75 million albums and over 1 million digital tracks in North America.

A formidable live act, the band will be announcing a U.S. tour next week and is already confirmed to perform at this year’s U.K. Download Festival in mid-June.

Unknown said…
Just pre orders my copy of their new album on itunes here: http://smarturl.it/HIMiTunes
I just couldnt wait for it to drop
April 24, 2013 at 4:49 PM