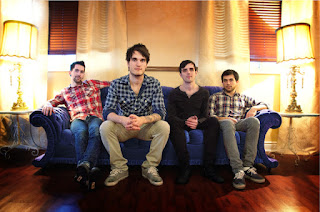 Canadian pop-punk act July has signed to Kick Rock Invasion in Japan. The band will exclusively release their debut full-length, What We Signed Up For, on April 10th in Japan. In addition, the band will once again be part of this year's Beyond The Blue Compilation.

One of the premiere independent record labels in Japan, Kick Rock Invasion has recently released many of the records for Hopeless and Fearless Records. In addition, Kick Rock Invasion puts out the annual Beyond The Blue Compilation, which highlights some of the best pop-rock and pop-punk acts from around the globe.

"We're so pumped to be a part of such an amazing label. To be able to be part of an incredible roster of artists is absolutely amazing and we want to thank Masa and everyone at the label for being so excited about our music," says singer Devin Moody.

What We Signed Up For is comprised of the band's last EP, MMXII, along with select tracks from the band's debut release, The Best Nights EP, which are re-recorded and now feature Moody as the vocalist.

July will soon be announcing new tour dates along with a track listing and official artwork for the release.