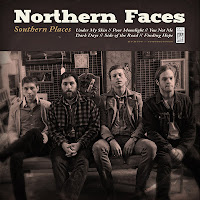 Equal Vision Records announces the signing of Northern Faces. The indie outfit, which hails from Albany, NY where EVR is also based.

"It feels great to sign to Equal Vision Records," explains Northern Faces' Bryan Shortell. "We've been working hard for a very long time, and there's a huge feeling of validation when you sign to a label as awesome as EVR. Knowing that there is a team of people that believe in our music enough to invest their blood, sweat and tears into forwarding our career is humbling and something we'll never take for granted."

He continues, "After we finished tracking the songs for our EP, we sent over some rough mixes, and turns out, everybody was really excited about them. One thing led to another, and after a few meetings with everyone, it was obvious that EVR was the perfect home for Northern Faces. Not only is the whole team incredible, but they've released countless records we grew up listening to and have signed some of our favorite bands (Portugal. The Man, The Snake The Cross The Crown, etc.)"

The band features Shortell and Marco Testa on vocals and guitars, Matt Ippolito on bass, and Mike Ryan on drums. The band solidified their lineup in early 2012 after heading to an isolated cabin in Vermont to begin writing their debut effort. Free of technology and other daily distractions there, the band wrote the six songs that now comprise their impressive upcoming release, Southern Places. The EP will be out digitally on Equal Vision Records on March 5.

In December 2012, the band premiered "You Not Me" on indie alternative radio station WEQX and soon after released a second song, "Poor Moonlight," through the band's Facebook. Both songs are now available streaming on SoundCloud.com/northernfaces.