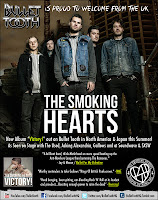 Bullet Tooth is excited to announce the signing of The Smoking Hearts from the UK! The band will release their Bullet Tooth debut album Victory! this summer in North America and Japan. Playing with the likes of The Used, Asking Alexandria, Gallows,  Andrew WK, and many more, The Smoking Hearts have cemented their reputation as one of the most exciting young bands in the U.K.  In fact, Jay and Moose from Bullet For My Valentine recently told the UK press, "We think everyone should check out The Smoking Hearts this year, they are good mates of ours. A brilliant band, think Motörhead on more speed beating up the Anti-Nowhere League then bumming The Ramones. Seriously, think about that. They have a new album out this year called Victory!, a definite recommendation."

Joining the family at Bullet Tooth and having labelmates like Affiance, Throw The Fight, First Blood, Serianna, Death Ray Vision, and more, was important to the band. Calvin Roffey (Bass) commented, "I'm really excited that The Smoking Hearts have joined Bullet Tooth. It's great that we're able to release Victory! with a group of people that understand what we're about as a band, and can help us reach new people that will rock out with us. Really excited to work with the people that have bought us some of of our favourite bands through the years, and together put The Smoking Hearts on the map."

With the release of their new album Victory! coming this summer, The Smoking Hearts are getting ready to show the world the result of those writing sessions. Once again proving that their unique blend of high-energy rock ‘N’ roll has the dexterity to resonate with punk, metal, and hardcore crowds alike. Recorded with Dan Weller and Justin Hill (Enter Shikari, Young Guns), and recorded over a period of four weeks in Fortress Studios, London, Victory! is an aptly titled record.  Clocking in at just over the 30 minute mark, Victory!  is a celebration, a testament to The Smoking Hearts' DIY/ 'never say die' approach to life on stage and off. Featuring guest backing vocals from over 40 of the band’s friends, Victory!  is a party of an album, the soundtrack to every good night out. The past 18 months have seen The Smoking Hearts go from their bedrooms, to clubs throughout the U.K. and Europe, destroy down in Australia as part of Soundwave Festival and even wreak havoc in the United States. Now, with the release of their new album, The Smoking Hearts intend on celebrating their victory worldwide.