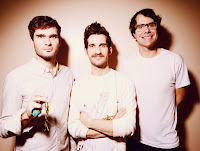 Their latest EP, US YOU ALL WE, which was released in November and is available digitally, as well as on vinyl and cassette. A new, expanded version of the EP is also available, and features two covers (Genesis and Split Enz) and remixes from members of Miniature Tigers.

The signing came about quickly, after the band met Bemis' Say Anything bandmate Jeff Turner at SXSW 2012 and led to the eventual introduction. Pretty & Nice's Roger Lussier explains, "We could tell in our discussions with Max that he really "got us" not just as musicians, but as people. Also, it's clear from listening to his stuff that Max grew up listening to a lot of the same music that we did. He and Equal Vision Records made it very clear that they respected our artistic vision for the band and that they thought our general vibe would fit well with the Rory imprint."

Bemis adds, "Pretty & Nice is both arguably the most "progressive" band we've signed as well as the band that harkens back to the legacy of my favorite bands of yesteryear. Post-punk and classic pop bliss. There is a lot of genius put into their recordings and they're just a great band."

The band released their debut LP Pink & Blue in 2006 and followed up with an EP, Blue & Blue, the following year. In 2008, Pretty & Nice launched their critically acclaimed Get Young full-length album through Hardly Art, earning rave reviews and attention. Pretty & Nice will put out their debut Equal Vision Records release, a new full-length album, in late Spring 2013 with full details to be announced soon. The band will also release two new songs as a 7" on April 20, Record Store Day. Side A will feature "Q_Q" and Side B will feature "On n On". The pressing will be limited to 500, on black vinyl.

Pretty & Nice is comprised of Jeremy Mendicino (lead vocals/guitar/gadgets), Holden Lewis (lead vocals/guitar/keys), and Roger Lussier (bass/keys/horn). The band has toured and shared stages with the likes of The Get Up Kids, Miniature Tigers, The Thermals, Title Tracks (John Davis from Q and not U), and Built to Spill.