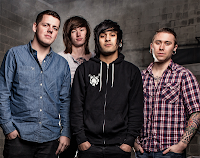 Arkaik Records, the brand-new record label offshoot of Arkaik Clothing, has announced its first signing. The label announced it will release the debut full-length record from Fairfax, VA's Lakeview this summer.

Titled Take The Fall, Lakeview's first full-length will feature 12 songs from the pop-punk/metalcore quartet, one of which can be streamed right now on YouTube. Leadoff single "This City Won't Be The Same Without You" accompanied the announcement of Lakeview signing to Arkaik Records and can be viewed and embedded via the Arkaik Records YouTube page.

"We're excited to bring on Lakeview as our first release," says Arkaik Records president Michael Newkirk. "Lakeview is a mix of multiple genres, and it's really important to us as a label to keep an open mind. We don't want to get ourselves stuck in one specific niche. At the end of the day, Arkaik Records was built by fans of music - not just one scene."

"This City Won't Be The Same Without You" features an infectious guitar riff accompanied by electronic complements, and the song shifts from a Mayday Parade-esque poppy vibe to harder portions similar to metalcore giants A Day To Remember. This is just the first taste of Take The Fall, which is set for a tentative release in May.

"We're super stoked over the response we have received for the first single," says Lakeview vocalist Taylin Large. "Teaming up with Arkaik Records felt so right, and we're very excited to see what the future holds for us. We can't wait to release this album and get out on the road to play it for as long as humanly possible."