Reviewed! Brokencyde - The Best of BC13 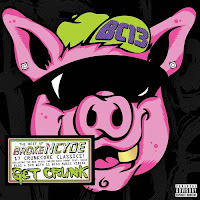 Brokencyde
The Best of BC 13
Breaksilence Recordings

With the Best of BC 13, Brokencyde, aka the innovators of ‘crunkcore,’ aka the band your parents don’t want you to listen to, aka a bunch of guys sitting around your local Hot Topic or Spencers who figured out how to start a band and sell records, presents 17 classics of crunkcore, a genre Brokencyde, and Brokencyde alone, venture in. Regardless of what these actual songs sound like, this is a band that surely knows what they are; they know how to cater to their audience and are experts at grabbing themselves attention. And speaking of grabbing attention, the bands brash and snotty mix of electro-infused flourishes and scream-added breakdowns (“Scene Girlz,” “40 Oz,” “Teach Me How to Scream”) do just that. Unfortunately, those somewhat listenable moments are mostly balanced out with others that the word vapid just doesn’t do proper justice to (“Sex Toyz,” “Hofosho”). And for those keeping score, yes, this collection of songs represents BC’s entire body of work – 2008’s BC13 EP (“Freaxxx,” “Schitzo,” “Bree Bree”), 2009’s I’m Not a Fan, But the Kids Like It! (“Get Crunk,” “Booty Call,” “Yellow Bus”), 2010’s Will Never Die (“Da House Party,” “Always Go Hard,” “Shake”), and 2012’s Guilty Pleasurez (“Still the King!,” “Whoa!”). There’s also a bonus disc that offers up 11 music videos for these tracks, which present at least some modicum of entertainment for those looking for it. If for some reason you’re looking for the best of Brokencyde, the Best of BC 13 is it, at least if you ask them or their scads of pierced, multi-colored haired fans. Just don’t say you weren’t warned.

Grade: C
Go Download: "Teach Me How to Scream"