No Omega Signs to Throatruiner Records 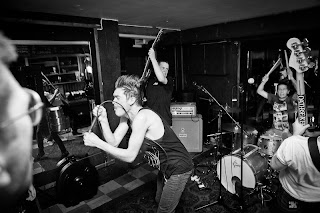 The band will enter the studio in late January to record Shame, the follow-up to its 2012 effort Metropolis. This new full-length is due out this spring on 12" vinyl.

In the meantime, head over to NO OMEGA's Bandcamp page to stream and download their previous releases for free: http://noomega.bandcamp.com.

No Omega is hopeless and heartbreaking doomsday hardcore punk. Since their forming in 2010, No Omega have been working hard on creating a sound that's both vibrant and melancholic. The idea of No Omega is to fuse a furious hardcore sound with a sludgier, more dark, melodic and resolute post-metal sound. No Omega always aim at writing something new; something that doesn't sound like everything else. The guitars are heavy, the vocals are filled with power and emotion, and the drums shift between straight up thrash/punk to lumbering and brooding metal.