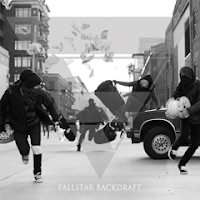 Fallstar, an unrestrained group of artists and musicians who draw just as much inspiration from their local punk and hardcore scene as they do from their hometown in general. "Our city is known for its global perspective, sustainable living, care for the homeless, and having ideas that challenge long-standing traditions and beliefs. So we've developed this way of thinking that is energized by our doubts and ideas. We're a west coast band, we're relaxed and not afraid of new things".

Fallstar love the mercurial atmosphere of a live show, and so write true to their genre with sing-alongs and crowd participation. The influences of hardcore and metal are there, but they aren't restrictive. The band spends countless hours layering and composing their songs to achieve the balance they desire. "Our music isn't incredibly technical, so there's lots of room for swinging guitars, jumping off things, chipped teeth and stitches."