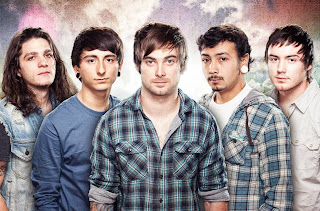 A full-length is expected later this year.

Timing is everything and Bleach Blonde is fast on the path to success. After officially founding the band less than six months ago (in August of 2012 to be exact), the group, featuring Danny Stillman and Danny Cooper of Drop Dead Gorgeous, came together when frontman Stillman (aka “Stills”) began writing via email with guitarist David Barella and Cooper, who lived in LA at the time. A month later, the trio joined forces with guitarist Michael Payne and bass player Coty Eikenberg. The five members officially formed Bleach Blonde, a name reminiscent of shared memories in Venice Beach and an homage to Nirvana.

Stills says the group has found inspiration for their "mainstream sound with an underground twist. We aim to think outside of the box and strive for a sound that we can call our own."

Bleach Blonde plans to record their debut full length (due out next summer) with Kris Crummett (Drop Dead Gorgeous, Dance Gavin Dance) and "take over the world," jokes Stills.

The band is also now being represented by The Working Group Artist Management (Never Shout Never, The Ready Set).