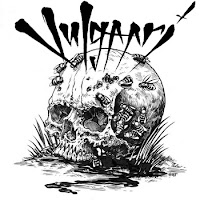 Cubo de Sangre – a new label built upon questionable morals, bad decisions, and distorted guitars - is proud to have partnered with Minneapolis, MN’s Vulgaari for its inaugural release.

Upon being self-released digitally through Bandcamp, Vulgaari was quickly recognized as the ideal debut release of Cubo de Sangre. Vulgaari, Finnish for “vulgar”, is Zack Kinsey and Brent Hedtke with an extended live line-up. Together they have created a craftwork of immense doom and sludge that is now available internationally on CD and soon-to-be double LP.

Cubo de Sangre is the first extreme metal label to call the state of Hawaii home, with a satellite office just outside of the Philadelphia area. With roots firmly planted in all things metal & punk, Cubo de Sangre is hell bent on unearthing a sublimely vile mix of evil and unruly.