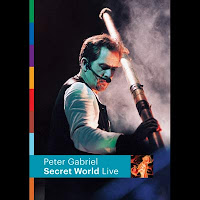 Peter Gabriel’s Secret World Live is good, very good  in fact, and a better representation of Gabriel’s stage abilities than last years New Blood - Live In London to be honest, though you have to realize that this is Peter Gabriel nearly two decades ago. Still, this is a release that people need to see, thanks to a stupendous setlist including some of Gabriel’s massive hits like the quirky “Sledgehammer” and the solemn “Solsbury Hill,” and that’s not even to mention tracks like “Don’t Give Up” and “In Your Eyes.” And as for stage presence, Gabriel delivers in spades, utilizing his stage like a playground, one complete with multi-level staging filled with elevators, moving floors and trap doors, and even a huge UFO which lowers from the ceiling. There’s a slate of extras as well, such as extra tracks like “Red Rain” and “the Rhythm of the Heat,” as well as a photo montage and exclusive interviews and behind the scenes footage that should come to be expected with any tradition Eagle Vision release, but the main selling point of Secret World Live is getting to go back in time and reminisce about Gabriel’s sonic glory days.