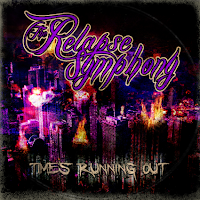 Talented upstarts the Relapse Symphony are a lot of things. They’re a little bit My Chemical Romance, a little bit Escape the Fate and a little bit the Blackout, but they’re perhaps no better described than as guitarist JC Charles puts it, “what a good rock band should be.” After listening to their debut EP Time's Running Out, that statement isn’t all that far off. Frontman Bret Von Dehl sounds like a snarling Alex Gaskarth as he time and time again leads the Relapse Symphony’s dizzying array of swirling guitars and bombastic percussion into battle on Time's Running Out, churning out concussive powerhouses rife with striking refrains (“Forgotten”) and infectious, angular melodies (“The Other Side of Town”), but there’s some bite to be found alongside all this bark. At times, Time's Running Out can act as a therapeutic mechanism, one with the ability to lift you up whenever you get down, as Von Dehl robustly emotes during “Make Your Move,” ‘if only I knew then/all the things I know now/you can get through anything/and everything works out somehow/I fight to win/no giving in’ and on the afore mentioned “Forgotten,” ‘we’ll take away the pain from these dark days/and you’ll never be alone.’ If you fancy yourself a scene kid that’s ‘in the know,’ then you need to get on this release immediately.